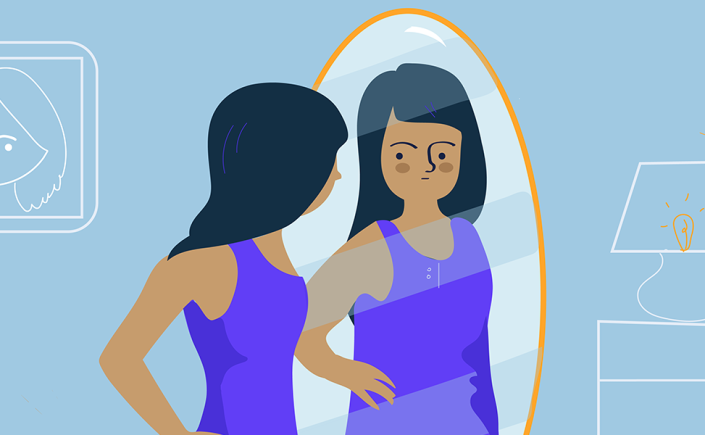 Body Dysmorphic disorder, or BDD, is a psychiatric disorder in which a person is preoccupied with an imagined or minor physical defect that other people usually don’t notice. BDD has various features that are similar to that of obsessive-compulsive disorders and eating disorders. Patients diagnosed with obsessive-compulsive disorder, or OCD, have distressing thoughts and images that they aren’t able to control. Emotional distress that can result from this can cause a person to perform particular rituals or compulsions. Regarding BDD, the person’s persistent preoccupation with his/her perceived physical defect can lead to ritualistic behaviors including constantly looking in the mirror or skin picking. Similarly to eating disorders, like anorexia nervosa and bulimia nervosa, Body Dysmorphic Disorder involves a concern with body image. However, while eating disorder patients are concerned with body weight, those diagnosed with BDD are worried about a specific area or part of the body.

Body Dysmorphia affects approximately 2% of the general population; however, BDD usually goes undiagnosed so the number of people who actually have the disorder could potentially be much greater. Those with body dysmorphia oftentimes feel a significant amount of shame regarding their perceived flaws which may hinder them from seeking treatment. BDD prevalence differs by gender, as women are reported to have higher rates of this disorder than men. Factors such as living with a pre-existing mental condition like depression or anxiety or experiencing bullying or abuse during childhood or adolescence can increase the risk of Body Dysmorphic Disorder. The typical onset for BDD is between the ages twelve and seventeen, around the time when adolescents go through puberty and certain bodily changes.

Social media platforms like Instagram oftentimes feed us an interminable supply of filtered and unrealistic depictions of different people and their lives. It’s easy to compare yourself to well edited pictures of models, celebrities, and even friends online, making you feel as though you don’t measure up as you are. Also, various forms of bullying like body shaming or slut shaming can occur online and can easily result in distorted body image and low self-esteem. Those with BDD sometimes choose to socially isolate themselves due to high level of shame related to their bodily appearance. While social media doesn’t necessarily cause body dysmorphia, it can serve as a trigger for those already predisposed to the disorder, or could possibly worsen existing symptoms. The main treatments used for BDD are cognitive behavioral therapy (CBT) and antidepressant medication, specifically serotonin reuptake inhibitors (SSRIs). Many patients use therapy and medication simultaneously. These treatments are meant to help reduce obsessive compulsive behaviors, improve stress level management involved in these behaviors, and aid patients in viewing themselves in a more loving and less judgmental light.

If you or someone you know is struggling with Body Dysmorphic Disorder, Arista Counseling and Psychotherapy can help. Please contact our psychotherapy offices in New York or New Jersey to talk to one of our licensed professional psychologists, psychiatrists, psychiatric nurse practitioners, or psychotherapists at Arista Counseling & Psychotherapy. Contact our Paramus, NJ or Manhattan, NY offices respectively, at (201) 368-3700 or (212) 722-1920 to set up an appointment. For more information, please visit http://www.counselingpsychotherapynjny.com/ .